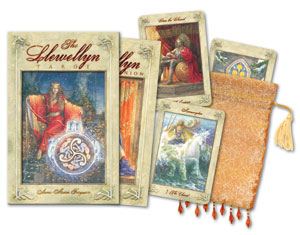 Only 1 left in stock

Over a century ago, a young boy left Wales and journeyed to America, where he started a small press, now known as Llewellyn Publications. Llewellyn George’s adventurous spirit and Welsh heritage embodies The Llewellyn Tarot, which also celebrates the publisher’s enduring legacy.

From the creator of the popular Legend: The Arthurian Tarot Kit, this lavishly illustrated deck offers universal appeal (based on Rider-Waite) with a Welsh twist. A compelling story unfolds starring Rhiannon as The Empress, Bran the Blessed as The Emperor, The Wild Herdsman as The Horned God (the Devil), Gwydion as The Magician, Llew Llaw Gyffes as the Bringer of Light, and other figures from Welsh mythology. Watercolor imagery beckons us forth into a mystic world of ancient forests, sensuous seascapes, and wondrous waterfalls-gorgeous landscapes brimming with mystery, meaning, and magic. Also included is The Llewellyn Tarot Companion, which features an introduction to the craft and history of tarot, along with Welsh legends infused in this deck.

There are no reviews yet.

Be the first to review “The Llewellyn Tarot” Cancel reply 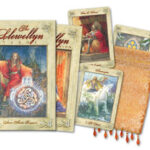 You're viewing: The Llewellyn Tarot $24.95
Add to cart